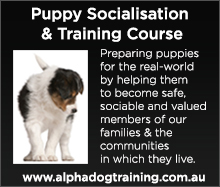 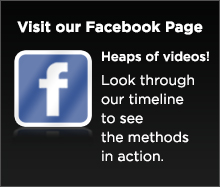 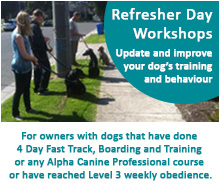 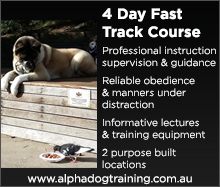 Ideals and Aspirations - The history and development of Alpha Dog Training

Back in mid 1996, Myself (Greg Fontana), George Visentin and Kylie Bright (Kylie is no longer with Alpha Dog Training) were well and truly living our passion for helping others to train their dogs within the dog training industry. Disillusioned and concerned with the feedback from former customers/members of many dog clubs and businesses, we began to make plans for starting our own dog training business with a fresh new approach to customer service and relations. This was indeed a big move in our lives and a massive commitment in both time and money just to get things started. From day one we wanted people to feel that there was something very different about our approach to dog training and that their time spent with us could be both fun and productive. This ideal is as strong now as it ever was!

Alpha Dog Training was created with an ideal in mind that would promote a positive atmosphere conducive to enjoyable learning (for dog and handler), encompassing training skills that would not only be easy to acquire, but also practical to retain. The process that would create this outcome was to revolve around the development of class structures containing more realistic formations and exercises that could be easily adapted to the customer's individual lifestyle needs. Thus was born the conceptual name, 'Lifestyle Dog Obedience Training System' - now known as the "Lifestyle Canine Communication System".

Atmosphere, being as intangible as it is, was one of the most important ingredients of the whole system and indeed one of the major catalysts for all innovations and developments that have helped to maintain its very existence. The days of trudging along to dog training for another dose of the same old thing was to be a thing of the past. Personal service directed at promoting individual achievement was to be the main approach to creating a positive dog training experience for those who would make the effort to come and train their dogs with us. All this at a pace that suited the customers individual abilities and standard within each class and not having to be locked into set duration courses (10 week courses etc).

The concept of 'the way you train is the way you react' (a training approach relevant to any skill needed on a regular but random basis) was the initial foundation for the majority of the training concepts that were implemented in the early stages of training development. Every exercise was evaluated for its practical use in 'real time' applications away from the training centre and was then put into a teaching format that would be not only easy for the handler to understand, but also for the dog to learn. Many considerations were (and always will be) taken into account and as the system has developed, so too has the evaluation and allocation of each exercise into their relevant skill acquisition levels.

The techniques taught were also broken down into a consistent formula that was to become the cornerstone of all skill acquisition, for the dog and handler. "Pattern Learning" is the term I use to describe the simple format that all exercises follow to produce an easy to understand, overall concept, making the learning of new skills, no matter at which level, a recognisable process. This 'recognition' allows the dog to adopt the pattern from previous experience in the learning process of other techniques. Learning then becomes a comfortable activity which in turn promotes a clearer path to skill acquisition. This of course also adds a very positive dimension to the whole training process.

The "Pattern Learning" term was also a useful reminder to all our dog handlers that consistency was in fact the key to their dogs both learning and maintaining all obedience skills. It was hoped that all handlers would automatically follow the pattern whenever giving commands to their dogs, wherever they were! In effect, the pattern is relevant at both ends of the lead and clearly promotes the concept of training consistency.

A Class Full Of Individuals: The development of Alpha's unique training system

The passing on of skills and practical knowledge was recognised from the outset as being the most important component of the overall training framework. All the best training techniques in the world are rendered worthless if there is no effective way of conveying the skills needed to put them into the real time' application for which they were intended. NEW and flexible class structures were developed not only to promote the realistic practice of each exercise, but also freedom for the trainers to be able to adapt their teaching methods to suit the varying individual standards within each level. Class structures were based around new training concepts such as Random Formation, Random Release, Random Command and Random Practice which allowed the trainers to move more freely amongst the handlers, making them far more accessible to the individual dog/handler teams whenever needed.

Increased freedom for the trainer was a direct result of the handlers themselves being able to move freely within each class. Random Formation is a class format in which everyone within the group is able to find their own ground, so to speak, and work their own dogs on an individual basis even within a larger 'pack' of dogs. This whole process was devised to totally empower each handler to work their own dog, to their own level within any larger group. This way they could raise or lower the level of distraction depending on the dog's tolerance levels (excitability and socialisation) and gradually break down the distance as they both became more comfortable with the whole training process.

The trainers taking the class and their assistant trainees move through the formation and offer help or encouragement as the dogs are actually being worked. Changes of direction are done on an individual and random basis and not under the direction of the trainer. This way handlers are better able to respond to distractions by changing direction at any time and thus encouraging the dog to pay more attention and focus on the handler's movements rather than the distraction. This also makes Random Formation a workable process due to the fact that it is the handler who should determine when to turn and how close or far to move within the group. Of course it is the dog who will dictate this information to the handler who must then have the freedom to act accordingly.

Developing a class format that would truly empower each individual and their dog also relied on all trainers taking into account the actual learning processes that were taking place at both ends of the lead. The old concept of making everyone do every exercise at exactly the same time for exactly the same amount of time was to be elegated to the 'special use only' ideas box in the trainers teaching arsenal.

Random Release was introduced into the class formats as a natural progression in the development of our synergistic training system. It simply allows the handlers to give their dogs the release command during any exercise if they feel the dog has reached a milestone in its learning, regardless of what the rest of the class is doing at the time. By being able to 'reward' their own dog for its achievements as they occurred on an individual basis, handlers were themselves learning to recognise their dog's development in any given exercise, making the whole training process not only faster, but more enjoyable also.

The other side of the coin in relation to releasing your own dog when it was best to do so, is being able to give a command at various times within a group of other handlers giving their dogs possibly the same command. Random Command became a standard teaching tool for participants in the classes where they were given the option of responding to a trainer's instructions within fifteen seconds of hearing it. Each instruction would be prefaced with "In your own time (exercise)" or "when youre ready (exercise)". This meant that handlers now had the option of randomly choosing when they would give a certain command rather than just giving it immediately at the same time as everyone else in the class. Essentially this taught the dogs to pay attention to their handlers and not just to copy the rest of the class before hearing a command from their owners. This also allowed the handlers to read their dogs and work on gaining their attention under the distraction of commands happening all around them at the same time. A simple, but very important concept.

All of these instruction concepts enabled trainers to use this teaching framework as a means of getting to know their customers and promoting the achievements that often go unrewarded, but are crucial to the overall development and understanding of competent handling skills. As with any teaching process, the more personalised it becomes, the more satisfactory the results for those learning the skills involved. When this focus is aimed at the handler/owner, the obvious winner is going to be the dog at the other end of the lead. The key to our teaching process is to help owners understand their dogs in order to better communicate with them the skills they are trying to teach. At Alpha Dog Training, we train you to train your dog, and our flexible class structures allow you to do just this!

Of course for any dog training method to be truly effective, one must also have a practical and realistic practice strategy in place that will compliment the techniques learned whilst at the training centre. Random Practice is a common sense concept that revolves around the normal 'interaction' times spent with your dog, not regimented practice times that are often too hard to keep up and often unrelated to non practice times where the dog must be obedient also.

From this little snippet of our early ideals and aspirations you can see what has motivated us to continue with the development of Alpha's progressive dog training system.

Take a look around the rest of the site to see how our service has developed.

Better still, come and visit us and see our unique service in action.
Your first session and guided tour is absolutely FREE!